The Englishman Eric Blair (1903-1950) used the pen name George Orwell. Renown for his novel 1984, he also wrote other novels, essays and commentary.

Someone told me the essays of George Orwell are among the best in this form of writing. So I bought a book containing his major essays, but hadn’t read them with my full attention until recently. The foreword in my copy of the book is by Bernard Crick, a student of Orwell’s work and one of his biographers. Here are excerpts from this foreword:

Orwell chose to write in the plain style… (because) he thought it the best way to reach the common reader and to convey truths… His chosen public was… the lower-middle class who had only had secondary education, together with the self-educated working class. Although he was fully conversant with modernist, even futurist literature (as shown by his good understanding of and sympathy with Joyce’s Ulysses (and) Henry Miller’s Tropic of Capricorn…), he deliberately avoided… those devices of modernism which… had begun to make the modern novel inaccessible to the common man—books by intellectuals for intellectuals, needing a university degree in English Literature to be understood.

In Crick’s George Orwell: A Life, he puts Orwell’s 1984, Animal Farm and Homage to Catalonia in the company of Jonathon Swift’s Gulliver’s Travels and Thomas Hobbes’s Leviathon.

As I went through Orwell’s essays I came to Inside the Whale, a three-part essay with Henry Miller featured in parts one and three. Part one begins with:

Henry Valentine Miller (1891 – 1980), American novelist and painter. Known for breaking with existing literary forms and developing a mixture of novel, autobiography, social criticism, philosophical reflection, surrealist free association, and mysticism that is distinctly always about and expressive of the real-life Henry Miller and yet is also fictional. (Wikipedia)

When I first opened Tropic of Cancer and saw that it was filled with unprintable words, my immediate reaction was a refusal to be impressed… Nevertheless, after a lapse of time the atmosphere of the book… seemed to linger in my memory in a peculiar way. A year later Miller’s second book, Black Spring, was published. [Note: Tropic of Capricorn, mentioned in the foreword, was published after Black Spring]. By this time Tropic of Cancer was much more vividly present in my mind… My first feeling about Black Spring was that it showed a falling-off… Yet after another year there were many passages in Black Spring that had also rooted themselves in my memory… (R)ead him for five pages, ten pages, and you feel the peculiar relief that comes not so much from understanding as from being understood. ‘He knows all about me,’ you feel; ‘he wrote this specially for me.’ It is as though you could hear a voice speaking to you, a friendly American voice, with no humbug in it, no moral purpose, merely and implicit assumption that we are all alike… In Black Spring there is a wonderful flashback of New York, the swarming Irish-infested New York of the O. Henry period, but the Paris scenes are the best, and… the drunks and dead-beats of the cafés are handled with a feeling for character and a mastery of technique that are unapproached in any at all recent novel. All of them are not only credible but completely familiar… 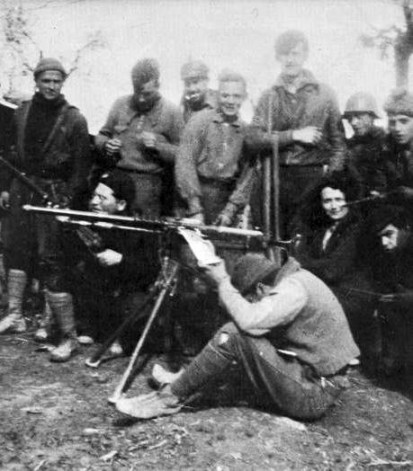 Orwell volunteered to fight as an infantryman for the Republicans against Franco’s Nationalist uprising. He joined the militia of the non-Stalinist Workers’ Party of Marxist Unification. Orwell was shot in the neck, near Huesca, on May 20, 1937. Image Description: On the Aragon front at Huesca: Orwell is the tallest standing figure; Eileen Blair is crouching in front of him (March 1937).

Orwell has much more to say about Miller and his writing and the times they both lived in. Of the major differences in the works of these two writers is that Orwell was explicitly “political” and Miller was adamantly non-political. Miller didn’t care about the Spanish Civil War except to see it as evidence of man’s stupidity; Orwell was present in the war zone. Also, I can’t remember one earthy four-letter word in Orwell’s writing (other than, possibly, ‘hell’ or ‘damn’), whereas Miller’s pages are replete with four-letter references to bodily functions and parts.

Another difference in the men was in their personal lives. Orwell lived only 46 years and married when was 33. He was, however, unfaithful to his wife. “I was sometimes unfaithful to Eileen, and I also treated her badly, and I think she treated me badly, too, at times, but it was a real marriage, in the sense that we had been through awful struggles together and she understood all about my work, etc.” (from Crick’s biography). The couple adopted a child and ultimately separated but didn’t divorce. His first wife died when he was 41, and Orwell married again, to his lover and from his sick bed, two months before his death.

Miller lived 89 years, married five times, and had countless other liaisons including with the famous (some will say infamous) Anaïs Nin. His relationship with Nin in a ménage à trois that included his wife, June, is detailed in Henry and June: From a Journal of Love, by Nin.

But then, Eric Blair did spend one and one-half years in Paris during the period Miller traveled there with his wife before moving, alone, to live there. Also, Blair was in contact with people similar to those Miller lived with and wrote about. In a biographic sketch for an American reference book, Blair wrote: “… After my money came to an end I had several years of fairly severe poverty during which I was, among other things, a dishwasher, a private tutor and a teacher in cheap private schools.” And in the preface to an edition of Animal Farm, he wrote: I sometimes lived for months on end amongst the poor and half criminal elements who inhabit the worst part of the poorer quarters, or to take to the streets, begging and stealing. At that time I associated with them through lack of money, but later their way of life interested me very much for its own sake.” [Both quotations are from citations end-noted on page 104 of Crick’s biography]. Orwell later, in 1933, published Down and Out in Paris and London, his first full-length work. It is a story in two parts on the theme of poverty in the two cities.

It seems not unlikely, then, that two such different persons could find affinity with each other as writers. In the index of Crick’s biography of Orwell, there are 16 pages listed that contain the name of Henry Miller. On page 202 Crick writes:

(Orwell) carried on reviewing novels all that year (1936)… and he entered into a brief but revealing and mutually respectful correspondence with Henry Miller whose Tropic of Cancer and Black Spring he had grown, after initial doubts about the former, to admire greatly… Orwell admired Miller for his rhythmical English, his frankness and what he saw as his control of fantasy.

The library is at Big Sur, California, on State Highway 1, three hours drive south from San Francisco. From L.A., going north, the total drive time is about 6 1/2 hours. Miller fell in love with the rugged, isolated region on his first visit in 1944, and promptly decided to move there. Upon his arrival Miller wrote, “Here I will find peace. Here I shall find the strength to do the work I was made to do.”

When I saw mention of Henry Miller in Crick’s foreword to the Essays, I remembered I recently bought two of Miller’s trilogies but hadn’t yet read some of these six novels, and hadn’t re-read those over which I had pored for the sexy parts when I was an adolescent.

In Tropic of Cancer Miller recounts a time in Paris, around 1928, when he was traveling with his wife June (whom he fictionalized as “Mona”). Mona loved the writing of the Swede, August Strindberg, who had spent some difficult years in Paris. In 1930 Miller went to Paris, alone, to write, without friends or money or a place to live. In a depressed state Miller passed by Pension Orfila at 62 rue d’Assas where Strindberg spent six months in 1896.

In those days, when I first knew her, she was saturated with Strindberg. That wild carnival of maggots which he reveled in, that eternal duel of the sexes, that spiderish ferocity which had endeared him to the sodden oafs of the northland, it was that which had brought us together…

A diary Strindberg kept at this time and later published under the title, Inferno, made a strong impression on Miller:

After leaving the Pension Orfila,,, I began to reflect on the meaning of that inferno which Strindberg had so mercilessly depicted… It was no mystery to me any longer why he and others (Dante, Rabelais, Van Gogh, etc., etc.) had made their pilgrimage to Paris. I understood then why it is that Paris attracts the tortured, the hallucinated, the great maniacs of love… 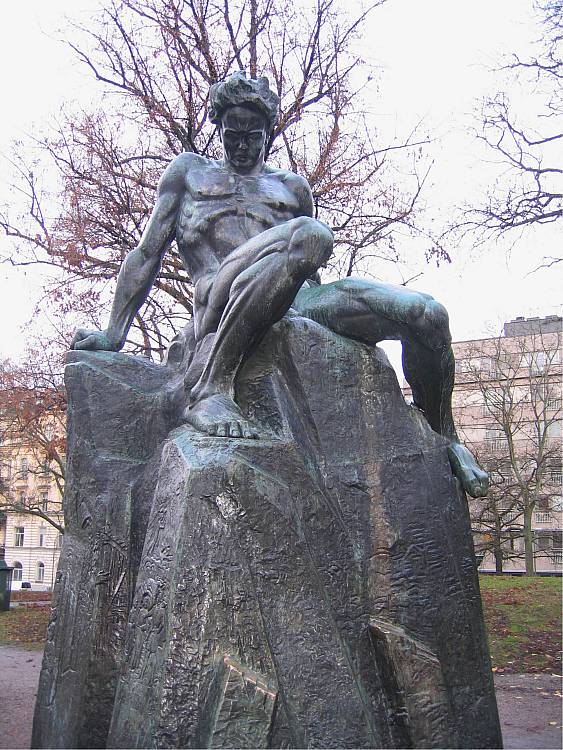 Well, at the time I was reading this, about the connection between Miller and Strindberg, I had gotten an assignment to help an Italian woman improve her spoken English (in Stockholm!), and she lives across from a park where there is a great statue honoring Strindberg. One day, having arrived for my regular appointment earlier than usual, I wandered the neighborhood and found the Strindberg Museum which includes the last place he lived and worked in. I later visited the museum, bought a book of some of his plays, in English, and toured Strindberg’s old apartment, on the 4th floor of a building on a hill overlooking downtown Stockholm.

To my utter surprise and delight I learned that Strindberg revered the German writers Wolfgang von Goethe and Friedrich von Schiller, as well as the composer Ludwig van Beethoven. These were my father’s heroes, about whom I heard much and, in the case of Beethoven, whose music I have heard from my earliest days. There are two small plaster busts of the writers in Strindberg’s study, and a life mask of Beethoven on a wall.

There was always a heroic picture of Beethoven in my father’s home. How often did I hear “Beethoven got me through The Great Depression“?

Now you see how I got from Orwell to Miller to Strindberg to Beethoven on a wall.

And, now to read the plays of Strindberg I bought at the museum:

10 thoughts on “From Orwell to Miller to Strindberg: A Journey Ending with Beethoven on a Wall”