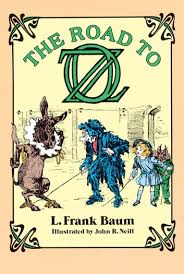 From The Road to Oz, by L. Frank Baum, 1909: In which is related how Dorothy Gale of Kansas, The Shaggy Man, Button Bright, and Polychrome the Rainbow’s Daughter met on an Enchanted Road and followed it all the way to the Marvelous Land of Oz, encountering strange people and interesting adventures along the way.

My father read to me and my sister Diane, and we later read for ourselves, all 14 Oz books written by L. Frank Baum. There were more written by others after Baum died, but they didn’t come up to the standard his books established, according to both Dad and me.

I often think of Johnny Dooit when I am engaged in manual labor; he provides inspiration. I also learned to appreciate the value of tools and a can-do attitude through him, later buttressed by real life experiences.

The first book, The Wonderful Wizard of Oz, and the unforgettable movie made of it in 1939, are essential parts of my childhood. “Somewhere Over the Rainbow,” sung by Judy Garland, never fails to evoke tender feelings in me.

But, there is so much more to the full story of Oz. Here are the 14 books, in publication date order:

You can access the text of all of these books online, here.

In addition to The Road to Oz another favorite of mine is Rinkitink in Oz, King Rinkitink of Gilgad is a Falstaffian character who rides a surly billy goat who talks, of course, and in a most disrespectful manner to everyone, including especially the king. There is a young man, the Prince of Pingaree, who accompanies the King to Oz, in order to escape his kingdom’s enemies and to seek help from the ruler of Oz. The Prince has three magic pearls that figure in his ability to overcome great dangers on his trip to Oz.

Prince Inga’s father, King Kitticut, had told him, before the King and Queen were captured by enemies: “Each of the three possesses an astonishing power, and whoever is their owner may count himself a fortunate man. This one having the blue tint will give to the person who carries it a strength so great that no power can resist him. The one with the pink glow will protect its owner from all dangers that may threaten him, no matter from what source they may come. The third pearl — this one of pure white — can speak, and its words are always wise and helpful.” To add spice to the story, the Prince has trouble hanging on the the pearls as he, King Rinkitink and Bilbil the goat search for the the safety and the help of the Land of Oz. 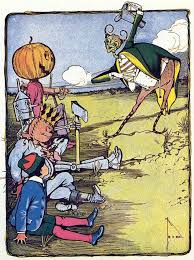 A major point in this book is that Dorothy Gale of Kansas is not the main character, as she is in so many others–and he is a boy. There is another book where the main character starts out, from our view, as a boy but is later transformed back into his original condition as Ozma, The Royal Princess of Oz. This occurs in the second Oz book, The Marvelous Land of Oz, the only book in which Dorothy Gale does not appear.

One of my favorite characters is introduced in this second book: “H.M. Wogglebug, T.E.” whom you see lecturing the assembled characters in the image on the left. H.M. stands for Highly Magnified (he escaped from a professor’s magnifying apparatus) and T.E. means Thoroughly Educated (after all, he was a living specimen for students and therefore lived at a university). This character exhibits all the pomposity and windiness of the quintessential caricature of a professor. I think Dad and I saw ourselves in him.

Dad started the tradition of collecting, keeping and passing along the Oz books to the generation that follows. Some of the books I held as a young boy (and my sister, as a younger girl) are now in the possession of my youngest daughter Analiese and her nieces, my granddaughters Sydney and Sonya, and my great-granddaughter Quinn.

As you may sense, I could go on and on about the many and surprising array of characters in the Oz books, not all of them nice people, or even people at all.

I urge to read one to see if you can resist reading others, no matter what your age. 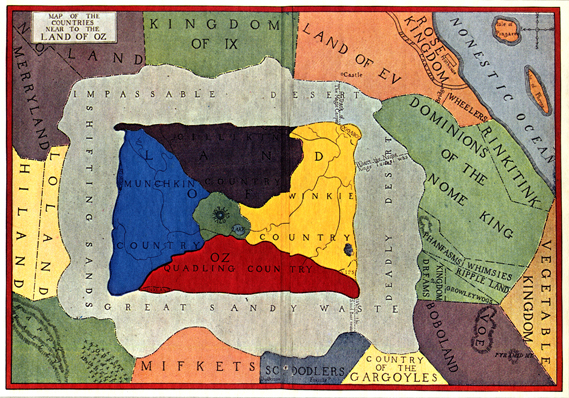 Over the years, I have read and re-read these books:

There may be a common thread among all these, and there certainly is in the last two. In each of these two, an old Greek teaches a much younger Englishman how to grow up, according to each mentor’s way. In The Magus, the pupil never quite gets there.

I recently was perusing the editor’s introduction to the revised 1978 edition of The Magus where I read that Fowles was influenced in his life, generally, and for the writing of this book, by his childhood love of three books:

This lead me to look for these books on the Internet and this search brought me to an obituary of Fowles, he having died in November 2005. I hadn’t heard of his death and it briefly saddened me. I was fascinated by this obit and a book review of his biography by Eileen Warburton. Then I came upon this 1996 article by John Fowles, himself, on the influences underlying The Magus. What riches the Internet brings us!

I read the three favorite books of Fowles’s youth, the first two being much quicker reads than Great Expectations. As I began this last of the three, I was surprised to see that I had not previously read the book, despite (or perhaps because) my father carried richly-bound Dickens books with us whenever we moved, which was often. How many times have we read in general literature reference to “Miss Havisham”?

I was prepared to hurry through ‘Expectations’ as I had the other two but found myself bound to slow down to closely read the rich dialog and unsurpassed characterizations. And what characters with such names: Mr. Pumblechook, Mr. Wopsle, the heartless Miss Estella, Mr. Wopsle’s great-aunt whose name we are never shown, “Old” Orlick who is not much older than Pip the young principal of this story, the hapless Pocket family, the lawyer Mr. Jaggers, and many more.

Through the reading of these books, articles, and obits I am now able to appreciate The Magus even more fully. As a sometimes writer, I find it enlightening to learn how an author’s life experiences affect his writing.