One can easily find a summary and analysis of the book on the Internet, such as this from “BookRags.” I have a different, but not contrary, view of the book which I offer below. 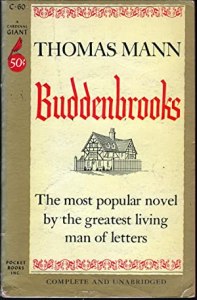 The edition I bought was published in 1952 when Thomas Mann was 77, three years before his death. It seems almost shameless for Pocket Books, Inc. to engage in such hyperbole in their presentation of this admittedly highly regarded novel, Mann’s first published novel at age 26. Mann’s being granted the Nobel Prize for literature was due at least as much for his later and more mature book, The Magic Mountain. In my view, Buddenbrooks is a wonderful and well-told story, but not as timeless as The Magic Mountain.

To offer more perspective for my comment, here are some of the other important living men (and women) of letters in Mann’s generation:

And, these are only the American men and women of letters during Mann’s lifetime.

Nonetheless, there is a great deal in Buddenbrooks making it commendable to your reading, if you can get past the initial tedium of necessarily learning about the family members and getting used to the social manners and ways of speaking at the time and place of the story (the nascent German state, around 1840-1880).

The full title of the original volume was (translated from the German) Buddenbrooks: The Decline of a Family.

My initial impression was that I was about to be immersed in a 19th century German soap opera about the middle and higher classes. I was determined not to let this deter me, and I was glad of this resolve not too shortly thereafter. The backdrop of this drama includes wars between various European entities including France, Prussia, some German city-states and Austria–all culminating in the unifying of the modern German state in 1871 under Otto von Bismarck.

The soulful underpinnings of this story, however, involve the clash of values between those represented by the Protestant church and those of the rising of mercantilist middle class. Additionally, there are the yearnings of the lower classes to be free of the ignominy of being, essentially, serfs to the noble classes and those of the middle classes attempting to emulate the nobility.

The fortunes of family Buddenbrooks are based on the family business, grain brokering for the most part. The business passes down the male line and ends with the death of the last of the male Buddenbooks who wished only to be a musician. This, of course, is a very simplified summary. There are many characters, related by blood, marriage, commerce and politics, carefully and fully drawn and with whom the reader can identify closely–with distaste or sympathy.

I was particularly moved by the religiously-oriented elder matriarch and the musically-oriented youth who ended the story. The two central characters are brother and sister, children of the matriarch and the last of those who were connected with the family business. The sister had the burden of marrying men (she divorced twice) whose positions seemed useful, at the time, to the family business or family fortune.

It seems a cautionary tale for those who are on a path to abandon soulful values for the lure of fortune and influence. Additionally, it shows what perhaps is the inevitable path of any family in its cycles of rising and falling and possibly, as in this case, disappearing.

I don’t read German so I can’t remark on the original prose. The translation seems to capture well the linguistic subtleties and regional differences (e.g., Hamburg vs. Bavaria).

An unexpected element of the story is how much the French language and some French manners were part of the family’s atmospherics. One male ancestor married a French woman whom we see briefly in the beginning of the book.

Having now read Buddenbrooks I feel I have done myself a favor. As a writer-in-training, I saw how the author cleverly structured the beginning of the novel to introduce the characters, and how he used a family diary to help us understand the history of the family. Such devices are invaluable in providing the detail necessary to understand the nature and trajectory of the novel’s characters and actions.

Aside from how it was instructive to me, I enjoyed the story and how it was told. In addition, I kept in mind my recent reading of Mann’s much later Novel, The Magic Mountain and could discern the author’s philosophical and literary trajectory thereby.

I suppose I should now read his Death in Venice which I have waiting for me in my bookcase.

So many books, so little time …